Cellular activity is the basis of nervous system communication, and it is also a potent tool to alter connections. We target electrical stimulation to the sensorimotor circuits spared by injury in an effort to have them take over the functions of lost connections. An appealing attribute of electrical stimulation is that it can be targeted to adaptive connections to restore function. We have observed short term adaptation of neural circuits to stimulation, which are likely synaptic effects. Electrical stimulation also causes circuits to sprout at their terminations and to form functional connections. These new connections are further reinforced in the setting of repeated practice. Our goal is to better understand the mechanisms of activity-dependent plasticity, so that we can apply in the most effective way for therapy. 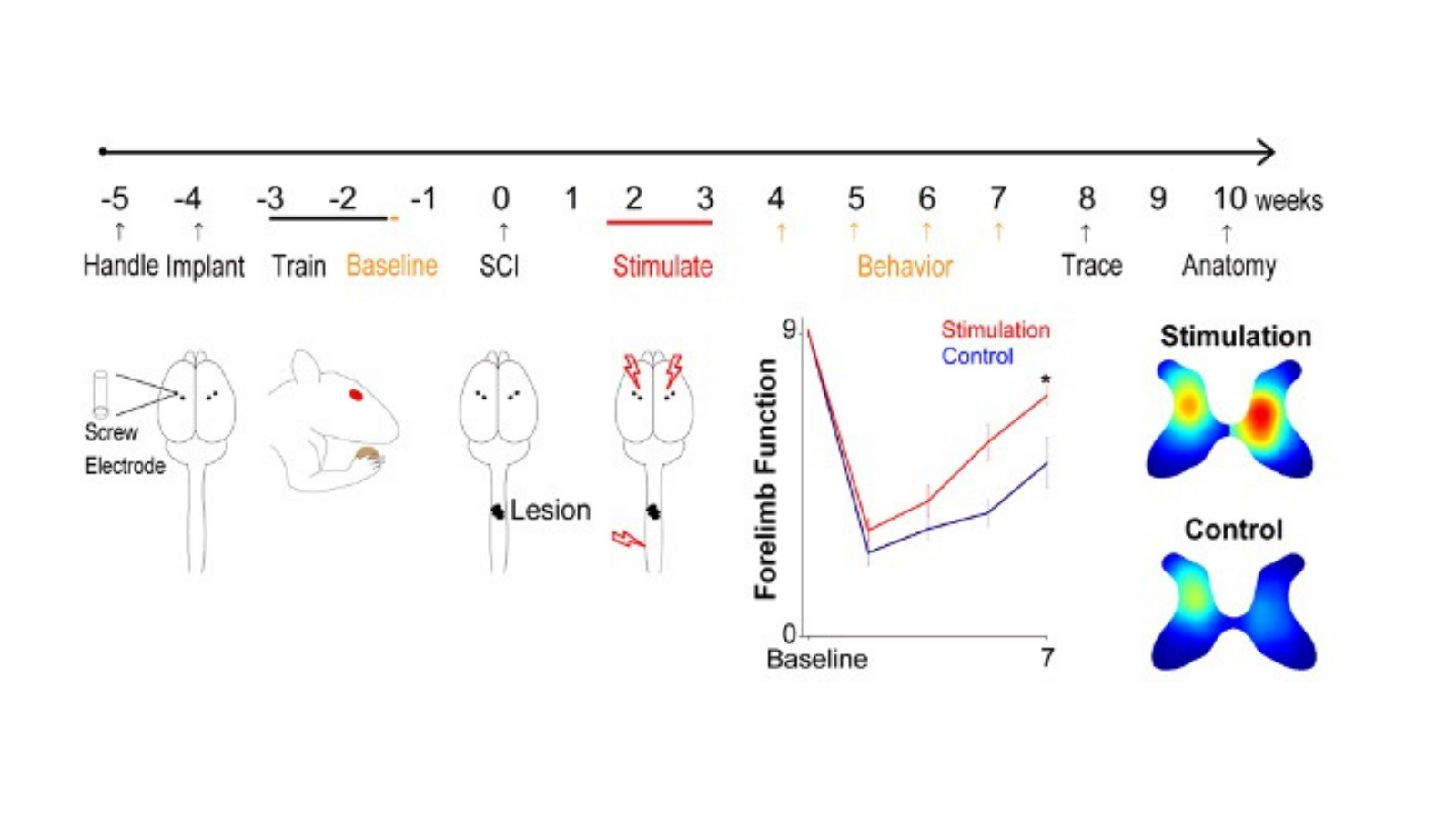 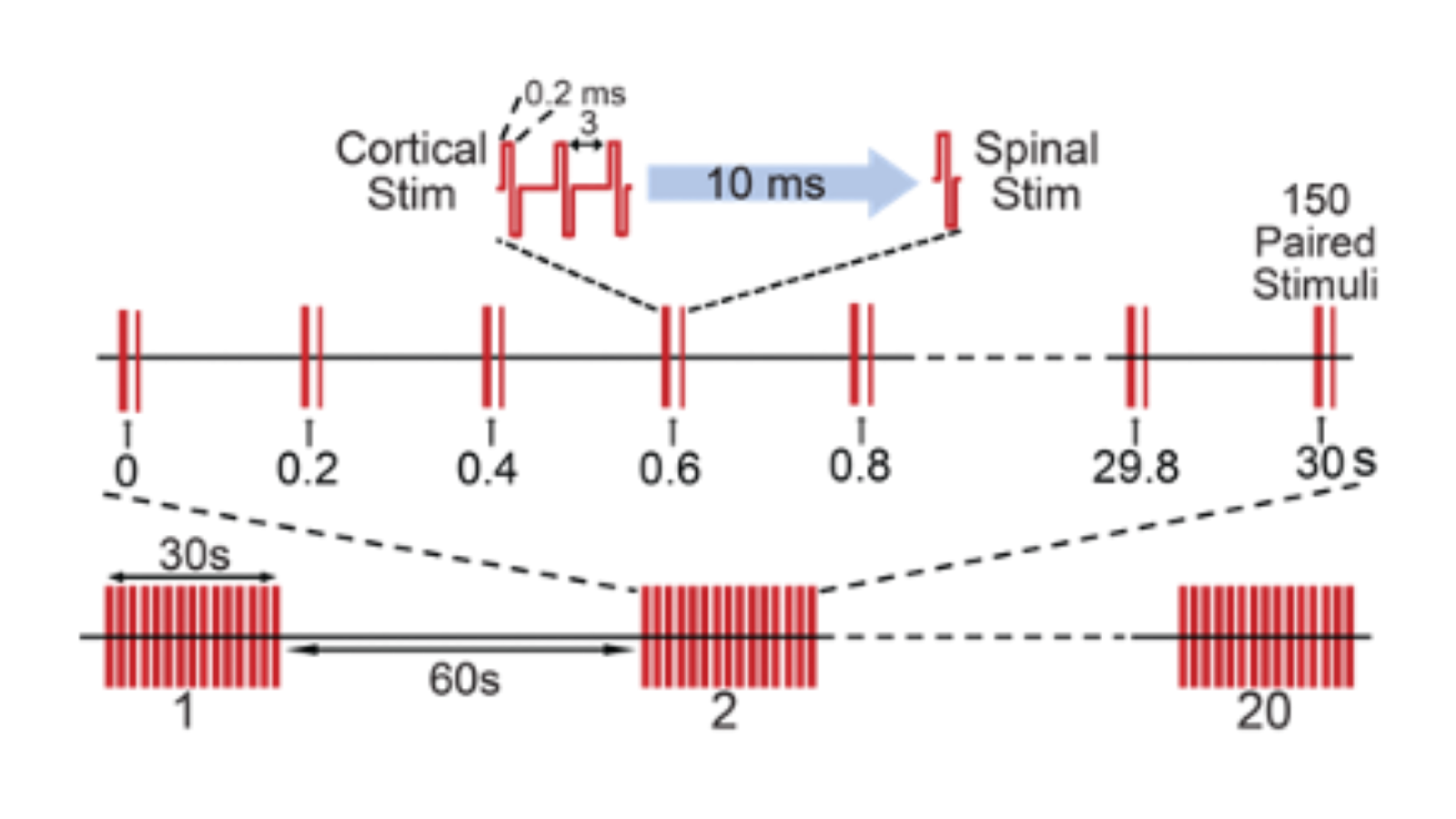 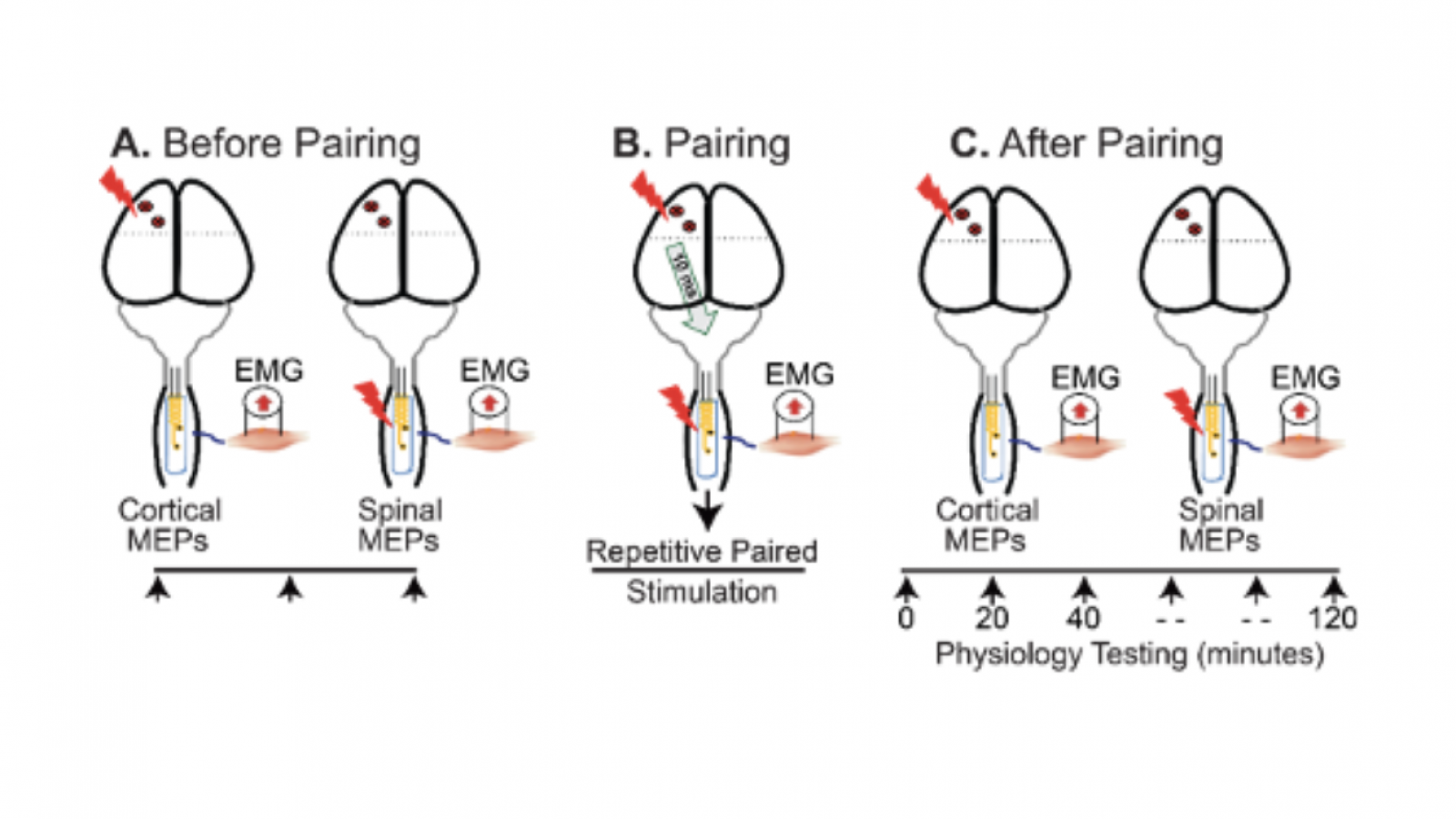 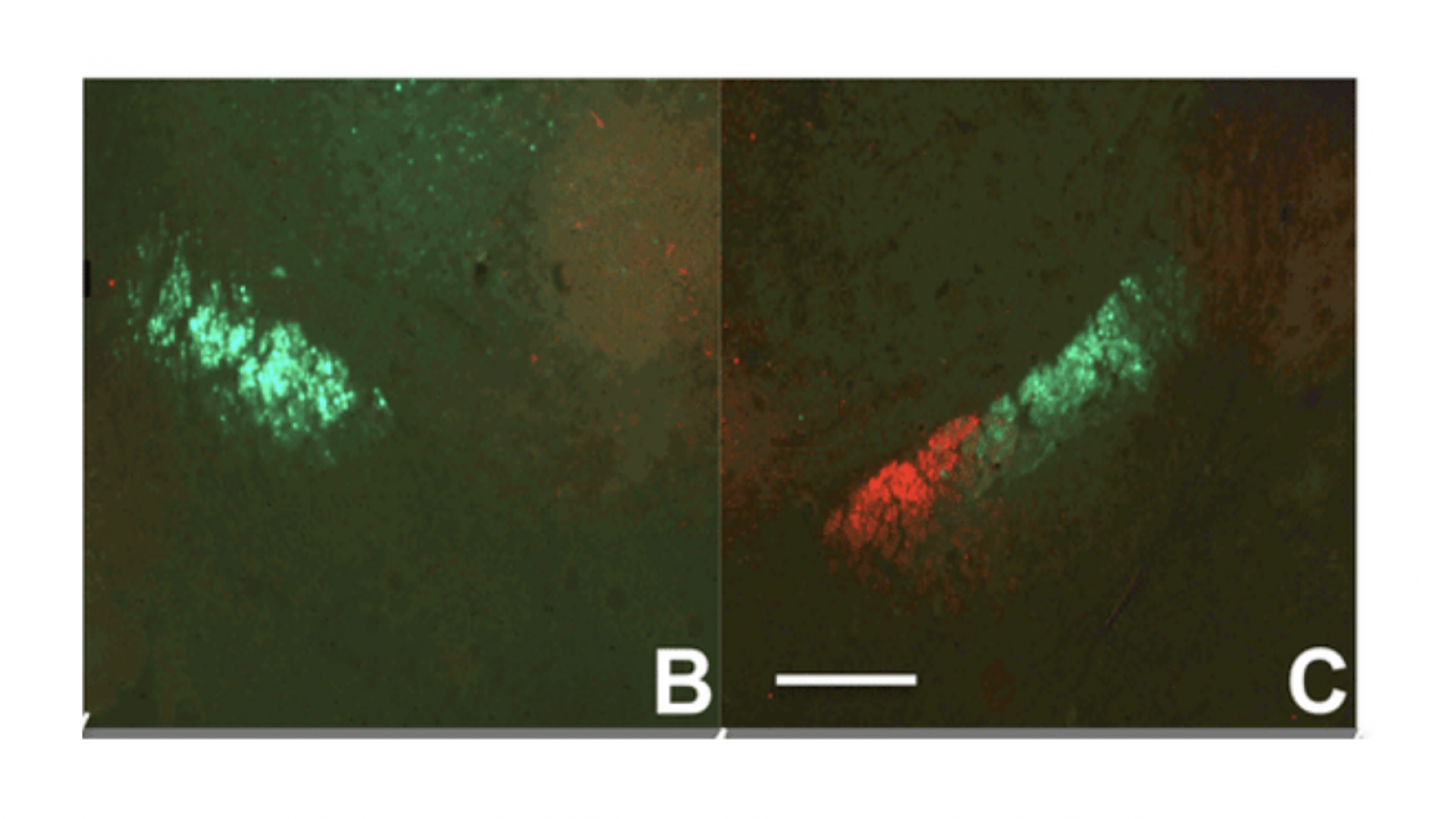 The overlap of the lesions (dark), the forelimb areas (red), and the hindlimb areas (green) in the IC of 4 rats. The overlap was strong among all 4 rats. 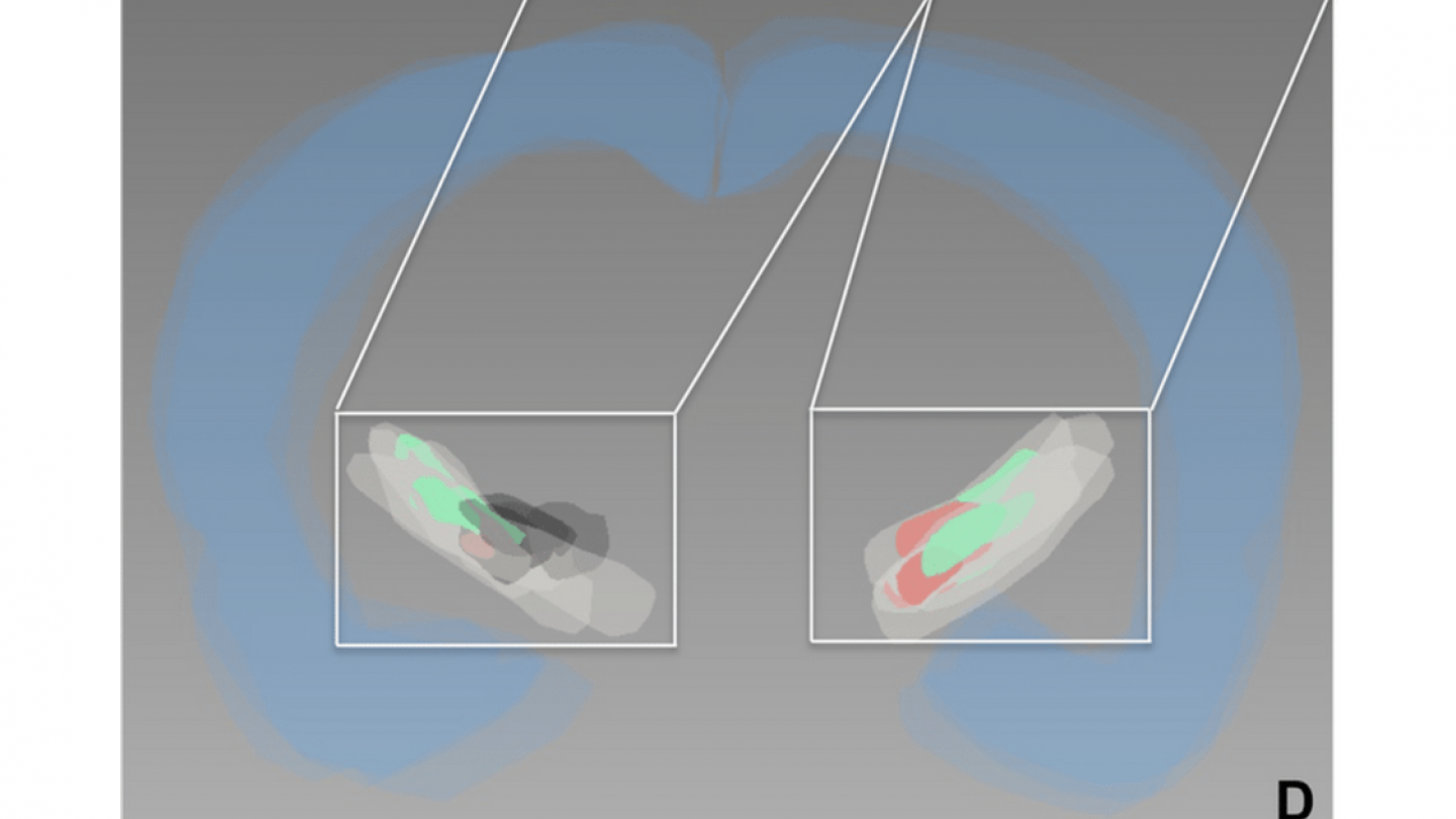 Goal: The goal of this project is to validate independently in our laboratory the rehabilitation effect of paired cortex and spinal cord stimulation protocol developed in Martin Laboratory in rats, as the first step to translate it to human patients use.

Method: We use the combined paradigms of intermittent theta burst stimulation, a mimic version of repetitive TMS, for the cortex and non-invasive transcutaneous direct current stimulation for the spinal cord.

Impact: Our study is a necessary step in establishing a robust therapy, applying a novel treatment to human patients confidently and also strongly endorsed by the spinal cord injury clinical and research community. The large effect size and the replication in independent laboratory validate this approach, which will be trialed in cats before being tested in people using non-invasive methods.

Background: Paralysis from spinal cord injury (SCI) is often the result of damage to the corticospinal tract (CST), the pathway that directly connects motor cortex to the spinal cord. Even in fully paralyzed individuals, however, a portion of the CST is often spared, providing an anatomical substrate for therapeutic interventions. Electrical stimulation of the brain or spinal cord has shown efficacy in improving CST function after SCI, either by amplifying the brain control signals or by increasing the sensitivity of the spinal cord. Whereas paired stimulation of the CST and its spinal targets have the potential to amplify the effects of either alone. The parameters for effective paired stimulation, and the site of their interaction, are not known. Our proposed experiments in rat models of CST damage will define the best location and stimulation parameters for pairing brain and spinal cord stimulation, as a means to improve motor function.

Goal: The goal of our research program is to improve the function of CST circuits and promote recovery of movement after SCI. We will test the hypothesis that pairing motor cortex and spinal cord stimulation will augment CST motor responses and improve forelimb function after SCI.

Methods: To enable safe and effective stimulation, we have developed a novel electrode array, which is inert, thin, and pliable.

Impact: This plasticity occurs at the level of the spinal cord. The experimental evaluation of this innovative paradigm will advance the therapeutic potential of using paired stimulation to enable recovery of function in people with paralysis due to CST damage.

Background: Recovery of forearm movement remains a largely unmet need for cervical spinal cord injury patients. We recently demonstrated that the drug 4-Aminopyridine (4-AP) is capable of raising significant levels of neural excitability from circuits that are spared after injury.

Goal: Our main goal is to optimally combine 4-AP and motor training to produce lasting motor recovery in arm and hand function.

Method: We will assess the changes in supination function associated with paired 4-AP and motor training using a three-pronged approach of behavior testing, anatomic tract tracing and physiological confirmation of which tracts assume control of function after treatment.

Impact: The results from this proposal are poised to provide a new rationale for using an FDA-approved drug which is safe in people with SCI to potentiate the effects of motor training.

Background: The motor circuits or tracts that mediate spontaneous recovery in motor function could be strengthened by electrical stimulation to improve functional recover. However, the mechanism underlying spontaneous recovery after spinal cord injury has not been understood.

To improve functional recovery by strengthening them with electrical stimulation.

Viral Tracers expressing fluorescent proteins are used for identification of the circuits. Tracer methods and expected results: 1. Anterograde viral tracers are injected into forelimb (FL) motor cortex. Tissue is sectioned coronally at cortex, C4 (lesion site) and C6 spinal cord. Anterogradely labeled axons are represented as dots in the tract and branching lines in the gray matter. The red is not shown in the gray matter. Methods and expected anatomical results: 2. Viruses for inactivation work as anterograde tracer. AAV1-DIO-hM4Di is injected into ipsilateral forelimb motor cortex (FL). AAV9-Cre is injected into C5-C7

Results: The efficiency of the viral tracers and viral inactivation system has been tested and confirmed.

Impact: When successfully done, this study will provide information about specific substrates for development of improved therapeutic interventions without off-target effect, that are strengthened to improve functional recovery after spinal cord injury.

Background: Residual connections left between the cortex and spinal cord after injury are too weak to result in significant functional recovery. Our lab has shown that paired motor cortex and cervical epidural stimulation convergent in the spinal cord produces long-lasting augmentation in motor evoked potentials that is stronger than using either of them alone. But little is known whether this paired stimulation could further strengthen the weak connections left after injury for hand functional recovery.

Goal: The goal of this study is to use paired forelimb motor cortex and spinal epidural stimulation for the first time to further improve forelimb function after bilateral C4 moderate contusion SCI in rats and identify the pathway responsible for mediating the stimulation effect.

Impact: The experiments have the potential to inform our understanding of spared motor connections after cervical spinal cord injury and whether those connections can be recruited using a promising therapeutic approach.

Background: Subcortical motor system strokes, such as those that affect the internal capsule and brain stem, are distinct from cortical strokes in that they leave motor cortex and spinal cord intact but destroy axonal connections between them.

Goal: In order to develop effective therapies for this common condition, it is critical to have a reproducible animal model.

Impact: The present model induces reproducible white matter damage suitable for studying the pathophysiology of subcortical stroke and for screening the therapeutic strategy of this disease.